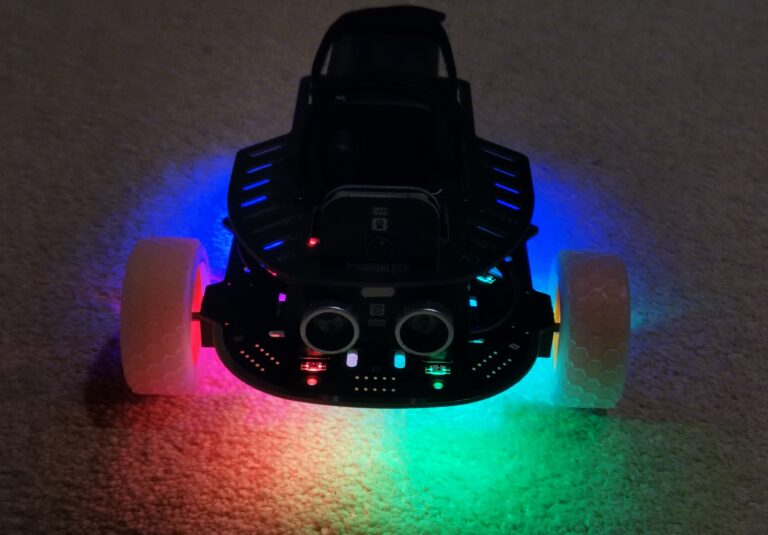 I’ve had my Raspberry Pi Trilobot for a while and have been busy trying to add more features to it. For now, Trilobot is controlled with an 8BitDo Lite gamepad, the camera activated via button and video streamed online. As of today, my bot can also recognise faces.

If you’re just interested in the full code, skip the below and have a look at my Github page. The blog post provides more details on how all the functions were implemented if you’re interested in the specifics.

Running functions in parallel with threading

In my previous article I had already managed to activate the camera using one of the buttons. Another button was assigned to control the bot with a remote. As it turns out, installing the 64-bit Raspberry Pi OS wasn’t a particularly good idea. It doesn’t work well with picamera. So now I’ve started from scratch with a 32-bit OS and revamped my script to include picamera.

As before, start.py is run automatically at startup and takes care of the button assignments. To ensure that all functions run seamlessly in parallel, I’m using threading. The first thread starts def activate_button() and from there each press of a button will activate its function in a separate thread, from remote control to the camera videostream, to facial recognition and shutdown of Trilobot.

The camera videostream and facial recognition both use the camera but stream via different methods, HTTPserver and Flask. I have therefore included a check whether one of the two camera functions is already running. This ensures they aren’t both activated at the same time, which would exceed capacity.

Importantly, we need to be able to exit all threads cleanly after the press of a button. In this case I have assigned button X, but any button works. A stop event has been included, which can either be set via SIGINT (hitting CTRL+C on the terminal) or by pressing button X. This will end the initial thread that controlled button activation and all other threads that might have been activated in the meantime, which run as daemons in the background. It will also switch off Trilobot’s underlighting and button lights.

In this version of the script, the picamera videostream is sent directly to a web browser. There is also no need to mess around with terminal prompts. The code below is based mostly on the picamera documentation with slight tweaks to the StreamingServer. After running it, you should be able to pick up the stream on your browser by typing https://<your bot's IP>:8000/index.html.

Now that we can control Trilobot with a remote and activate the camera, things get more interesting. We can also use picamera to teach Trilobot how to recognise faces.

There are quite a few helpful protocols out there that explain how to do this. The one I picked is an excellent tutorial from Tom’s hardware. It uses OpenCV, face_recognition, and imutils packages to train the Raspberry Pi to recognise a defined set of faces. It also includes a function to send email notifications if a person was recognised. You can find the details on how to install the dependencies and train the facial recognition model on their website.

As your model is trained, it will save all criteria to identify the faces you train it on in a file called encodings.pickle. Once you’re done with training you only need the encodings.pickle and haarcascade_frontalface_default.xml files to enable facial recognition on your Trilobot.

Save them both in a folder called facial_recognition and once you press button Y, your Trilobot should be able to run facial-recognition-with-flask.py without errors.

Before doing so, however, you should also set up the email notification if you’d like to use it. I found Mailjet‘s Email API quite helpful for this feature. It comes with a free tier for a limited amount of emails and does not require a credit card. Get an API and add your API key and secret into Trilobot as shown in Mailjet’s user guide. Next, add the email addresses and names for sender and recipients. You’re all set.

Once successfully setup, facial-recognition-with-flask.py will stream the video via port 8100 using a Flask application. Identified faces will be marked with bounding boxes, just as in the original tutorial. The name will be shown on top. The index.html file for the Flask application can be found in the templates folder.

So far so good. This concludes our tutorial for additional Trilobot features today.

This site uses Akismet to reduce spam. Learn how your comment data is processed.